The Oregonian featured the Rice Northwest Museum’s Annual Summer Festival this past weekend. 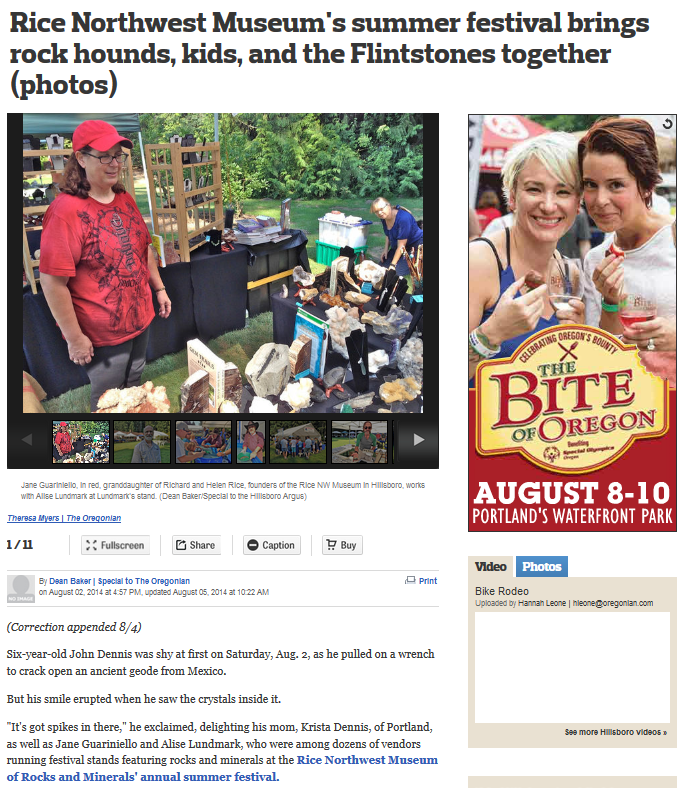 Six-year-old John Dennis was shy at first on Saturday, Aug. 2, as he pulled on a wrench to crack open an ancient geode from Mexico.

But his smile erupted when he saw the crystals inside it.

“It’s got spikes in there,” he exclaimed, delighting his mom, Krista Dennis, of Portland, as well as Jane Guariniello and Alise Lundmark, who were among dozens of vendors running festival stands featuring rocks and minerals at the Rice Northwest Museum of Rocks and Minerals’ annual summer festival.

As it happens, Guariniello is a granddaughter of the founders of the museum, Richard L. Rice and Helen M. Rice, who opened the museum in Hillsboro in 1952. She also was the museum’s director for a decade.

The museum is known around the nation, said Julian Gray, executive director. “It’s the best museum in the West between Los Angeles and Seattle,” he said. It features geologic wonders from dinosaur eggs to meteorites, and it’s listed on the National Registry for Historic Places.

On Saturday, the festival drew rock collectors such as Brian True, 13, who attends Evergreen Middle School in Hillsboro. True came with his father, Dave True, and the Tualatin Valley Rock and Gem Club. Brian showed off agates he has found and polished, and hundreds of other rock samples.

Mitch Metcalf of the Tualatin Valley Rock and Gem Club appeared as Fred Flintstone with his Flintstone Mobile and his lovely Wilma, played by Vivian Howard, entertaining all during the weekend event.

The annual festival featured a wide range of rock and mineral demonstrations, including panning for gold and jewelry making.

Put next year’s Summer Festival on your calendar for the end of July and first of August 2015.