Science Daily reports that planetary scientists from Curtin University found that a unique volcanic meteorite recovered in Western Australia may reveal the violent history of our solar system.

Associate Professor Fred Jourdan, along with colleagues Professor Phil Bland and Dr Gretchen Benedix from Curtin’s Department of Applied Geology, believe the meteorite is evidence that a series of collisions of asteroids occurred more than 3.4 billion years ago.

“Nearly all meteorites we locate come from Vesta, the second largest asteroid in the solar system. But after studying the meteorite’s composition and orbit, it appears it derived from a large, unidentified asteroid that was split apart during the collisions.”

The research team dated the meteorite with the argon-argon technique, a well-known method for dating impact crater events, to offer a glimpse of the asteroid’s impact history. 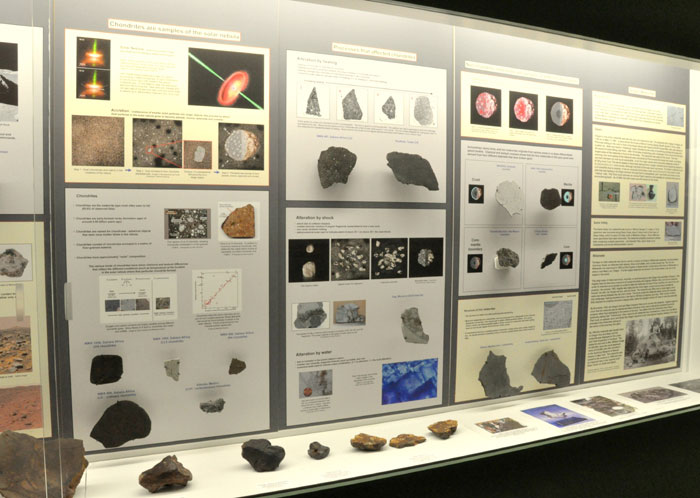 You can read more about this discovery on the report from Curtin University.

The Rice Northwest Museum is home to an outstanding collection of meteorites on exhibit in cooperation with the Cascadia Meteorite Laboratory of Portland State University. Each May, the museum celebrates the Annual Meteorite and Family Fun Day with extensive special exhibits, demonstrations, lectures, and more.

Interested in learning more about meteorites? Read our Meteorite article and visit the museum to touch the Gibeon Meteorite from Africa.

3 thoughts on “History of the Solar System Found in Meteorite”

Leave a Reply to Bill and Sharleen Harvey Cancel Reply