Last year, rare footage of a documentary on Mount St. Helens volcanic eruption from the late 1980s was shared on YouTube.

The documentary shows old photographs from before the eruption dating back to the 1950s, exploring the campgrounds, parks, lakes, and forested areas, now changed forever by the destructive forces of the volcano erupting in 1980. Mount St. Helens formed 275,000 years ago.

March 27, 1980, the volcano erupted, closing the Gifford Pinchot National Park, and bringing thousand of scientists and forest service experts to the mountain to document every moment of this monumental event. May 18, 1980, the volcano exploded at 8:32am, killing 57 people, and destroying 250 homes, 47 bridges, 15 miles of railroad, and 185 miles of highway. For over nine hours, the plume of ash rose approximately 16 miles above sea level, moving eastward at about 60 miles per hour, reaching Idaho by noon, and Edmonton, Alberta, Canada, by the next day. A debris avalanche triggered by the explosion and earthquake measuring 5.1 on the Richter scale, releasing 24 megatons of thermal energy. It reduced the mountains summit from 9,677 to 8,365 feet, leaving a one mile wide horseshoe-shaped crater, becoming one of the most deadliest and economically destructive volcanic events in the history of the United States.

Mt. St. Helens eruption was classified as a VEI 5 event, the only significant such event to happen in the contiguous 48 United States since the 1915 eruption of Lassen Peak in California. Before 1980, the last eruption of St. Helens was 130 years ago.

There are fifteen subduction-related volcanoes currently active along the Cascade chain, of which Mount St. Helens is one. Mt. St. Helens is less than about 37,000 years old. About 12,800 years ago, tephra, lava domes, and pyroclastic flows erupted, forming the pre-1980 shape. Based upon rock core tests by scientists, the mountain has been active for the last 4,000 years, with eruptions about one per 100 years. 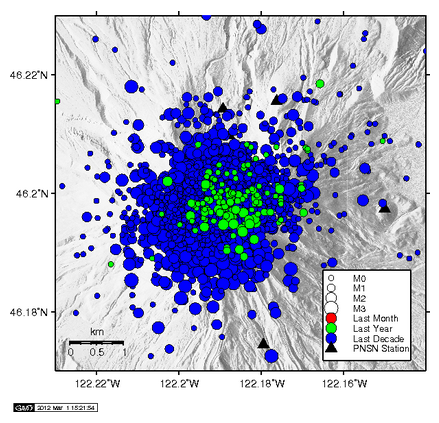 In 2004, new volcanic domes formed across the surface and under the new glacier around the summit. The last steam and plumes were recorded in 2008. According to the Pacific Northwest Seismic Network, earthquakes measuring 1 on the Richter scale or less happen multiples times a day miles under the mountains surface. The combination of volcanic and glacial activity on the mountain since 1980 gives scientists rare ongoing research opportunities in the new Mount St. Helens National Volcanic Monument.

In July 2014, scientists announced plans to map the interior of the volcano to create a sort of CAT scan to get a sense of the architecture of the magmatic system of the mountain. The project is called Imagining Magma Under St. Helens or iMUSH for short.

For more information on the historic Mt. St. Helens volcano and how to visit the park and area only a couple hours drive from the Rice Northwest Museum of Rocks and Minerals: