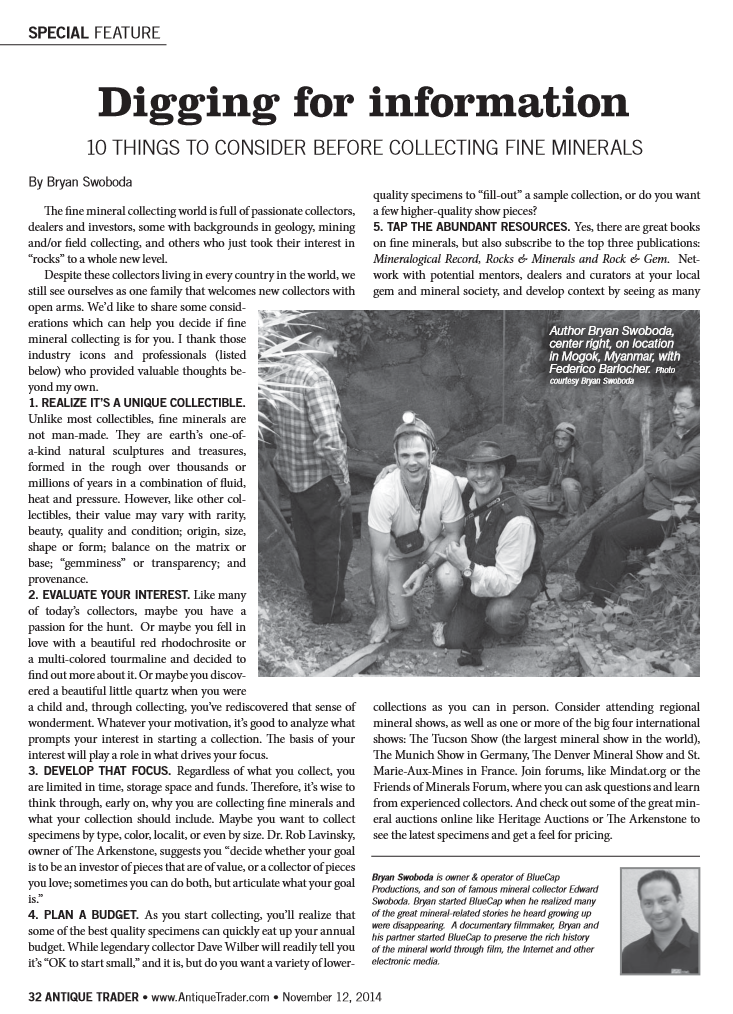 The Antique Trader magazine recently featured the Rice Northwest Museum of Rocks and Minerals as one of their favorite resources in their article, “Digging for Information: 10 Things to Consider Before Collecting Fine Minerals.”

The article is a step-by-step guide for those considering if fine mineral collecting is right for you, offering helpful information and resources, like our museum, to learn more about the art of collecting.

Fine Mineral Collecting is the collecting of one-of-a-kind natural minerals such as the red rhodochrosite that represents the Rice NW Museum on display in the museum’s Main Gallery downstairs, alongside many other rare and unusual minerals including tourmaline, benitoite, paravauxite, legrandite, and papagoite.

Fine mineral collectors collect as much for the beauty, shape and form, as well as their rarity, quality, and value. For many, finding and displaying a piece of natural history, a precious mineral formed over millions of years in a “combination of fluid, heat, and pressure,” is reward enough.

As mentioned in the article, by becoming a fine mineral collector, you would be in good company.

Who knows, your piece may have been owned by Andrew Carnegie, Washington Roebling (builder of the Brooklyn Bridge) or even famous pianist Roger Williams or [Oscar-winning composer of “Titanic”] James Horner, all of whom were avid Fine Mineral collectors.

The Rice Northwest Museum of Rocks and Minerals offers workshops, lectures, and help to get you started on your own fine mineral collecting hobby. Come by for a visit and learn more about how you, too, can start exploring the exciting and beautiful world of minerals.