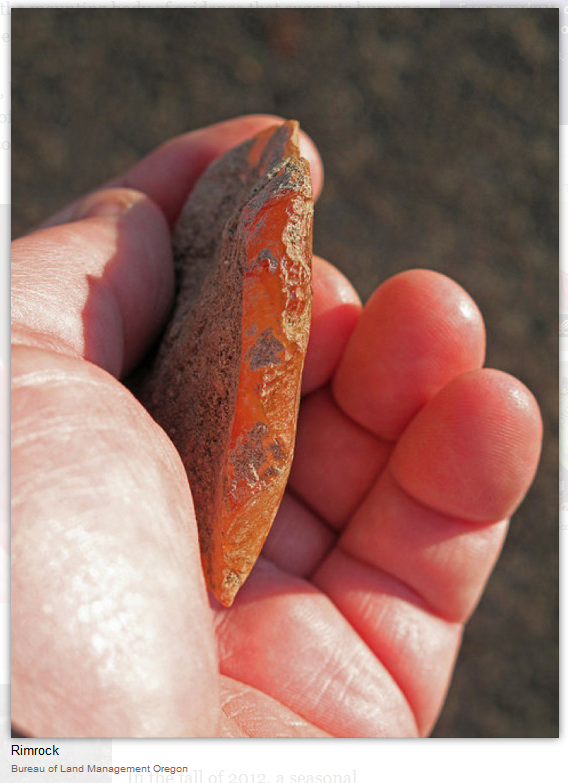 OPB Radio reported on the amazing archaeological discover of a knife carved from agate currently estimated from 15,000 years ago in Eastern Oregon, evidence of what could be the oldest human occupation west of the Rocky Mountains, shaking up many theories on North American human history.

Carved from clear orange agate, the stone knife has been described as a Swiss Army Knife of its day with a serrated point edge like a saw and a steep, flaked edge used to carve wood and scrape hides and cut meat from the bones of prey. Blood found on the stone has been tested and found to be Bison antiques, an ancient ancestor of the modern bison or buffalo in North America.

The agate knife was found by University of Oregon archaeological team led by Dr. Patrick O’Grady while excavating under a rock overhang by a dry stream where other evidence of an ancient human camp was also found. The evacuated area is now called Rimrock Draw Rockshelter.

According to the article from OPB:

In the fall of 2012, a seasonal excavator named Chuck Morelan struck a bit of luck…About 10 feet down, he discovered a thick layer of volcanic ash. A little further down, he found fragments of animal teeth, and the striking orange knife.

Thomas, who was working alongside Morelan, says the knife struck him as a little mysterious. The site is littered with obsidian, and yet it was carved out of agate, a rarity in the Oregon high desert.

The mystery of the little tool deepened when Thomas sent a sample of the volcanic ash found just above it to an expert at Washington State University for radiocarbon dating. The result: the ash came from an eruption of Mt. St Helens between 15,200 and 16,400 years ago.

“My jaw dropped. We didn’t expect it to be that old,” Thomas said. The ash effectively dates the tool and the animal teeth, which were found about 8 inches below it.

Radiocarbon dating of artifacts in North and South America established the current understanding that the Clovis people were the first to arrive in North American roughly 13,000 years ago during the last ice age by crossing the Bering Strait between what is now known as Alaska and Russia. This new discovery may cause anthropologists to re-evaluate their understanding of early human occupation of North and South America.

According to a report on the discovery from the Bureau of Land Management in Oregon (PDF), the layer of ash under which these items were found at the 12-foot level underground came from volcanic ask from a Mt. St. Helens volcano eruption 15,800 years ago.

Paisley Caves in south-central Oregon was believed to be the oldest known residence in North America dating to over 14,000 years ago.