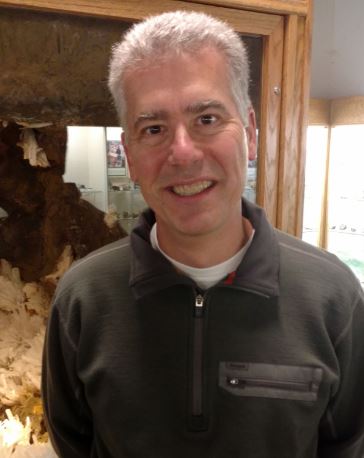 Member and Board of Directors, Pacific NW Friends of Mineralogy

Scott grew up in Spokane, WA and attended Eastern Washington University, where he earned degrees in both Finance and Economics.  Scott also has an MBA from the University of Oregon.  He has spent his professional life in the Financial sector, first working for the US Treasury as a bank examiner and then in the private sector.  Scott is an Executive for US Bank and has worked for this institution for the last 25 years.

Scott has had a lifelong love affair with minerals, and still has the very first specimen that started the obsession.  Like most people, school and career interrupted his collecting for a couple of decades, but Scott has been active for the last 10-12 years.  He appreciates the aesthetics of all minerals, but has a special interest in fluorites and quartz.  However, he will gravitate towards any specimen that he finds visually appealing, from thumbnails to large cabinet pieces.  Scott continues to have a passion for field collecting, and tries to take a trip every year.  Even if he doesn’t find a world class specimen, the adventure, and the friends made, is a major part of the fun.