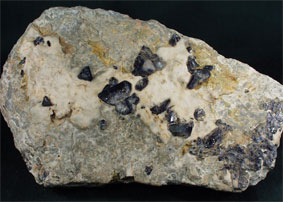 The Rice Northwest Museum of Rocks and Minerals is proud to announce the John Veevaert Collection of Benitoite will be on exhibit June 27th, 2012 until March 18, 2013. This is the first time a portion of the Veevaert collection has been on public exhibition.

Benitoite is a cyclosilicate. Cyclosilicates are also known as ring silicates because the silicate components in their structure are linked together in rings. Benitoite has hexagonal symmetry, so it can form perfect dipyramidal (double pyramids) crystals.

The name benitoite comes from San Benito County in California, where the first specimen was discovered in 1907. Benitoite is most commonly sapphire blue with hints of violet, but may sometimes occur as colorless, white, pink, reddish-brown or greenish-gray crystals. Benitoite is white when powdered (white streak), and has a vitreous luster. Its hardness ranges from 6 to 6.5 on Mohs scale. It sometimes occurs as twinned specimens. It fluoresces bright blue in short-wave ultra-violet light. This has proved to be a particularly useful property for identifying benitoite when mining. Benitoite is commonly found with neptunite and natrolite. A relatively rare mineral, benitoite has been found in California, Arkansas, Montana, Czech Republic and Japan. Gem quality benitoite is only found in California. Benioite was declared Californias State Gem in 1985. 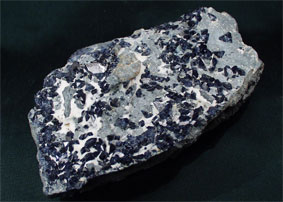 There are 55 specimens in the exhibit, representing only 20 percent of Veevaert’s entire collection, assembled during the past thirty-two years via field collecting and purchases.

There will be a variety of themes in the exhibition including the twinning of benitoite and neptunite, localities in addition to the Benitoite Gem mine (found in Japan, Arkansas, and California), four specimens showing the range of “straight from the mine” look to a finished specimen with stages in between, odd habits and rare crystal faces for benitoite, faceted benitoite and uncut gem rough, exceptional specimens, and an idealized wooden crystal model made in Germany.

Specimens in Veevaert’s collection range from micro-sized to some in excess of 30 cm, but those in the museum display average about 8 cm.

The museum is open to the public Wednesday through Sunday from 1-5PM. Members admission is free. Adults are $8, Seniors $7, Students under 17 are $6, and children 4 and under are free.