The Geologic Time Scale is a system of chronological dating.  It is used by geologists, paleontologists, and other Earth scientists to describe the timing and relationships of events in geologic history. It was developed through the study and observation of layers of rock and relationships as well as the times when different organisms appeared, evolved and became extinct. This Virtual Geologic Time Scale was built by 3rd grade students at The Cottonwood School of Civics and Sciences in Portland, Oregon. This project is by kids, and for kids (of all ages)!

Click on the Period names below to read, view, and hear more! 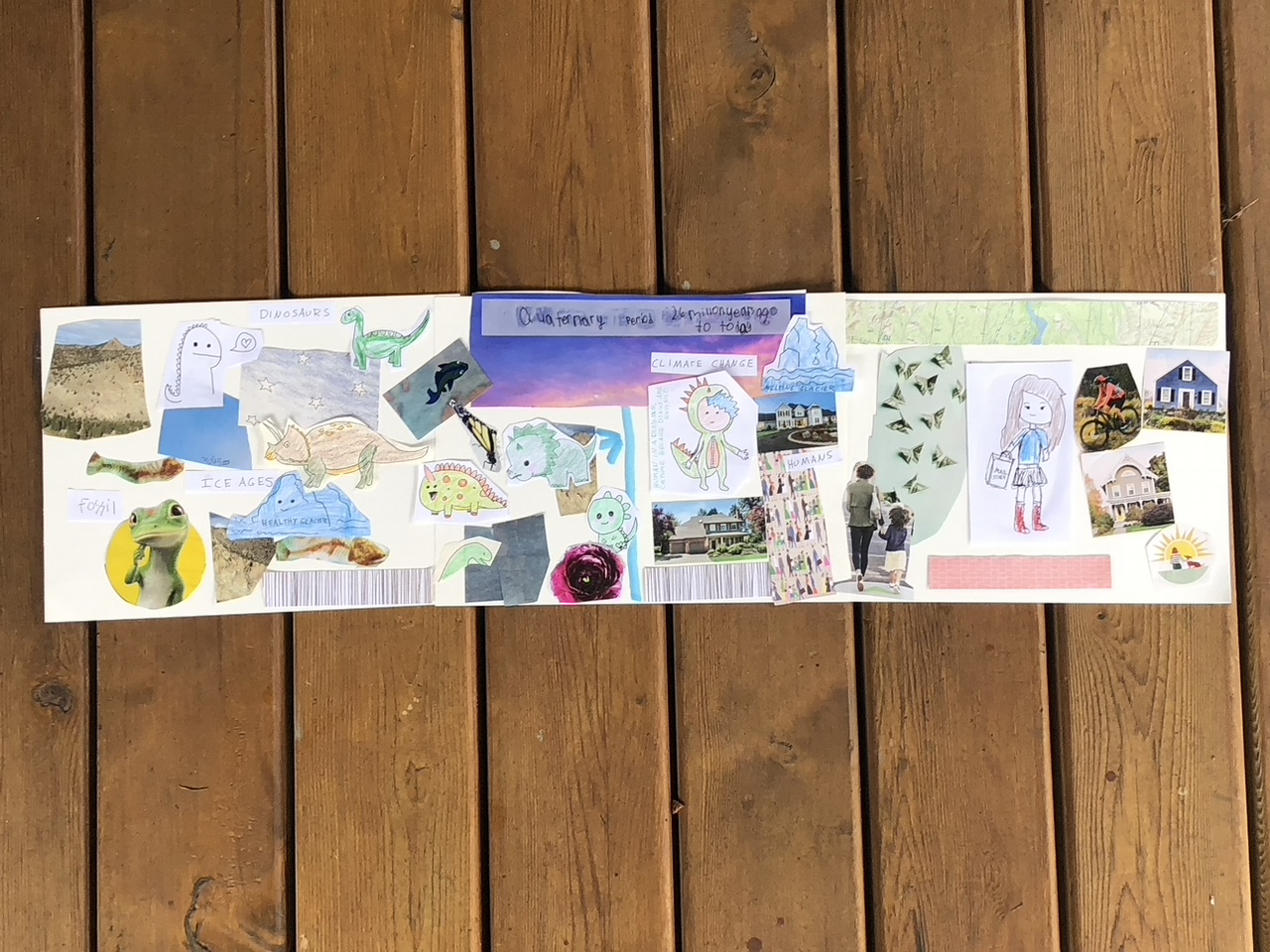 The Quaternary Period Climate change has affected the Quaternary Period, which is the most recent 2.6 million years. The planet has wobbled, causing ice ages. During warm spells, the ice retreats. Ice ages last about 100,000 years. Homo sapiens evolved about 190,000 years ago. The Quaternary is often called the age of the humans. —by Trixie
Neogene

Nobody has written about this period. Email us at info@ricenorthwestmuseum if you have something you’d like to add!

Paleogene
Nobody has written about this period. Email us at info@ricenorthwestmuseum if you have something you’d like to add!

If you thought that all herbivores were the prey of carnivores then you are wrong. There are some herbivores large enough to kill carnivores. During the Cretaceous period ferns grew all over the jungle floor. If you had a cut you would want to rub it under a fern. A fern is like medicine isn’t that cool?

201 million-145 million years ago, the Jurassic period was really cool. It had a lot of  dinosaurs. It had a wet climate and lots of plants. The seas were high.


During the Jurassic period Earth’s climate changed from hot and dry to warm and  humid. Most of the plants were tree ferns. At the start of the period Pangea continued to break up. On land dinosaurs were making their mark in a big way. Some dinosaurs are 85 feet long (that’s 26 meters). The Jurassic Period took place 201 to 145 million years ago.

The Triassic era is important because it is when the dinosaurs first evolved! The Chindesaurus, Coelophysis, Coloradisaurus, and the Eoraptor were some of the first dinosaurs.


The Triassic period had a major depopulation in the oceans because of the high carbon dioxide levels. Event 1: The Triassic period followed the great mass extinction. Event 2: Plants and iInsects did not go through any extensive evolutionary advances during the Triassic. Event 3: The sea was similar to present day or slightly higher. Event 4: Due to the dry climate, the interior of Ppangaea was mostly desert. Event 5: The first mammals evolved near the end of the Triassic period from the nearly extinct Therapsids.

In this period there are lots of events. One interesting fact is that Permian got its name from the Perm region in Russia.

Also the Permian ended with the biggest extinction in the world! The Pemian was 298.9 million years ago. The Pangea supercontinent was shaped like the letter “c”. Synapsid’s skulls had a hole.

These plants produced so much oxygen that they grew to huge sizes.  It was the age of oxygen! The end of the Carboniferous was marked by global climate changes and glaciers that covered the South Pole.

Devonian
The Devonian period started 419 million years ago.  It is known as the age of the fish.  This was the geologic period when sea animals evolved into insects and land animals.  Sea levels were high with much of Western North America underwater. Placoderms were armored fish that went through wide diversification and became the dominant marine predator. By the mid-Devonian period, the fossil record shows evidence that there were two new groups of fish that had true bones, teeth, swim bladders and gills.  By the end of the Devonian period, the proliferation of plants increased the oxygen content of the atmosphere considerably, which was important for evolution. The Devonian period was the second of the big five mass extinction events of earth’s past and previously thriving  reef-building creatures became extinct. —by Elias Garcia
Silurian

The Silurian Period occurred 443 to 416 million years ago. It was the third period in the Paleozoic era. It followed the Ordovician period and preceded the Devonian period. During this time continental landmasses were low and sea levels started rising. Silurian fossils show evidence of extensive reef building and the first signs of life beginning to colonize the new estuary, freshwater and terrestrial ecosystems. A warm stable climate provided for one of the most significant developments of the Paleozoic era to take place during the Silurian period: the arrival of the first plants to colonize the land.

The Ordovician Era time was between 490 and 443 million years ago. One type of animal that lived during this period was the horseshoe crab. They are still here today! Some other living things were  reefs and primitive plants. There were even more plants like mosses and bryophytes. It had a 20 million year ice age and 2nd biggest mass extinction ever. There were even glaciers that formed over Africa. After the mass extinction, about nine of every ten plant and animal species on the planet were gone. Then there was a wipe out of half of all the sea animals. Then there were freezing conditions towards the end of the Ordovician.

In the Ordovician there was lots of life– animals, plants, trilobites–lots of life. There were a few volcanoes. Then the earth was a big ice ball. One theory about how it happened was that there was a star that died. Gamma rays damaged the Earth’s atmosphere, making the earth freeze up. Then our sun’s ultraviolet light harmed life on Earth. 85% of life died which was a bad time for the trilobites. Only 15% of life was left.

What life was in the Ordovician: a list of animals and plants!

The Cambrian Period is the first geological period of the Paleozoic era that produced the most powerful eruption of evolution. The Cambrian Period started 541 million years ago. Life on Earth changed greatly during this period. This period lasted for about 53 million years. The period gets its name from Cambria, the Roman name for Wales. During the Cambrian period, some organisms used carbonate minerals for shells, so they had hard parts which could become fossils. There were many different kinds of life during the Cambrian period.  In the beginning of this period the Cambrian explosion occurred. This adaptive radiation produced the first members of the main groups of animals, or phyla. Almost all of this new life was in the oceans. In the early Cambrian years species such as the archaeocyathids (sponge like animals) built the first carbonate reefs. There was little life on land except a layer of microbes which were microorganisms- that is, organisms which are microscopic, meaning so small that people cannot see them with the naked eye.

The Precambrian period is 80% of Earth’s past. It started 4.5 billion years ago. It is made up of the Archean and Proterozoic eons. There were a lot of changes in the Precambrian. At this time, molten lava made land masses and the ozone layer was created. Oceans were created from water vapor in the atmosphere. Life started in the oceans. Geologists have found bacteria micro fossils in sedimentary rock from the Precambrian. The first multi-celled organisms were from this time period. Minerals we use today can be found in the Precambrian like silver, iron, nickel, and copper. 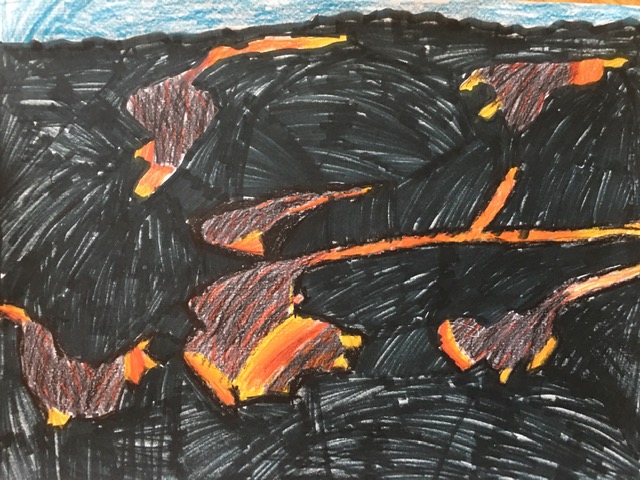