On Sunday, August 24, 2014, a magnitude 6.0 earthquake struck the Napa Valley of California. According to the National Geographic, the event was centered about 6.7 miles under the earth and was one of the largest in the area since the 1989 Loma Prieta quake that measured 7.0.

Today’s quake was reported by the Earthquake Report Center from San Francisco to Sacramento and classified as a “typical strike-slip earthquake with a mainly horizontal movement.” They called it the “most dangerous earthquake type in the world.” Their web page monitors and updates news about the earthquake.

While reports are still coming in, initial reports suggest this earthquake was triggered by a crack or fault in the earth’s crust known as the Franklin Fault, thought to be dormant for 1.6 million years.

Most earthquakes are concentrated along the Oceanic and Continental Plates, sections of the outer layer of the planet’s crust. Where the plates slip and push against each other, a fault occurs. There are three types of faults: normal, strike-slip, and reverse or thrust faults.

The strike-slip fault has little to no vertical moment, the rocks sliding horizontally across each other as the earth shifts and pressure is released. San Andreas and Anatolian Faults are strike-slip. Reverse faults thrust two crusts together to push and thrust them on top of each other in a vertical direction, typically creating mountain ranges. Normal faults pull the blocks of crust apart, creating a rift.

According to Exploratorium’s Faultline article, “Earthquake Faults & The San Andreas Fault,” earthquakes are part of the elastic rebound theory:

Rock may seem brittle, but itâ€™s actually quite elastic. By studying the 1906 earthquake, scientists learned that this ability of rock to stretch and store energy like a spring is what enables earthquakes to happen. Earthquakes are now explained by the elastic rebound theory, which goes something like this: Stress is applied to rock or to an existing fault over a period of time. This usually happens at a plate boundary where two plates are moving in different directions, or in the same direction at different speeds. As the stress builds, strong rock or a locked fault (a fault where the two sides are held together by friction) deform elastically. Eventually, the stress overcomes the rock’s strength or the fault’s friction, and either the rock fractures or the fault slips. The energy that’s released sets an earthquake in motion. The rock or fault rebounds, and the process may begin again.

Earthquakes are measured by the Richter scale developed by Charles Richter in 1935 in an attempt to measure the magnitude of an earthquake. As the science of measuring earthquakes improved and evolved from Richter’s initial studies, the moment magnitude scale (MMS) is now being used by the US Geological Survey, measuring the energy released where each unit corresponds to a ten-fold increase in wave amplitude.

Geologists and scientists study the history of earthquake stress forces on the rocks and rock layers. Earthquakes cause rocks to shift against each other, causing the rock layers to twist, fold, and break. The Rice Northwest Museum of Rocks and Minerals features examples of earthquakes’ impact on rocks and minerals in several of our exhibits.

The USGS Live Earthquake map shows the 6.0 earthquakes and aftershocks in the Napa Valley area of California. The red lines are fault lines in the area. 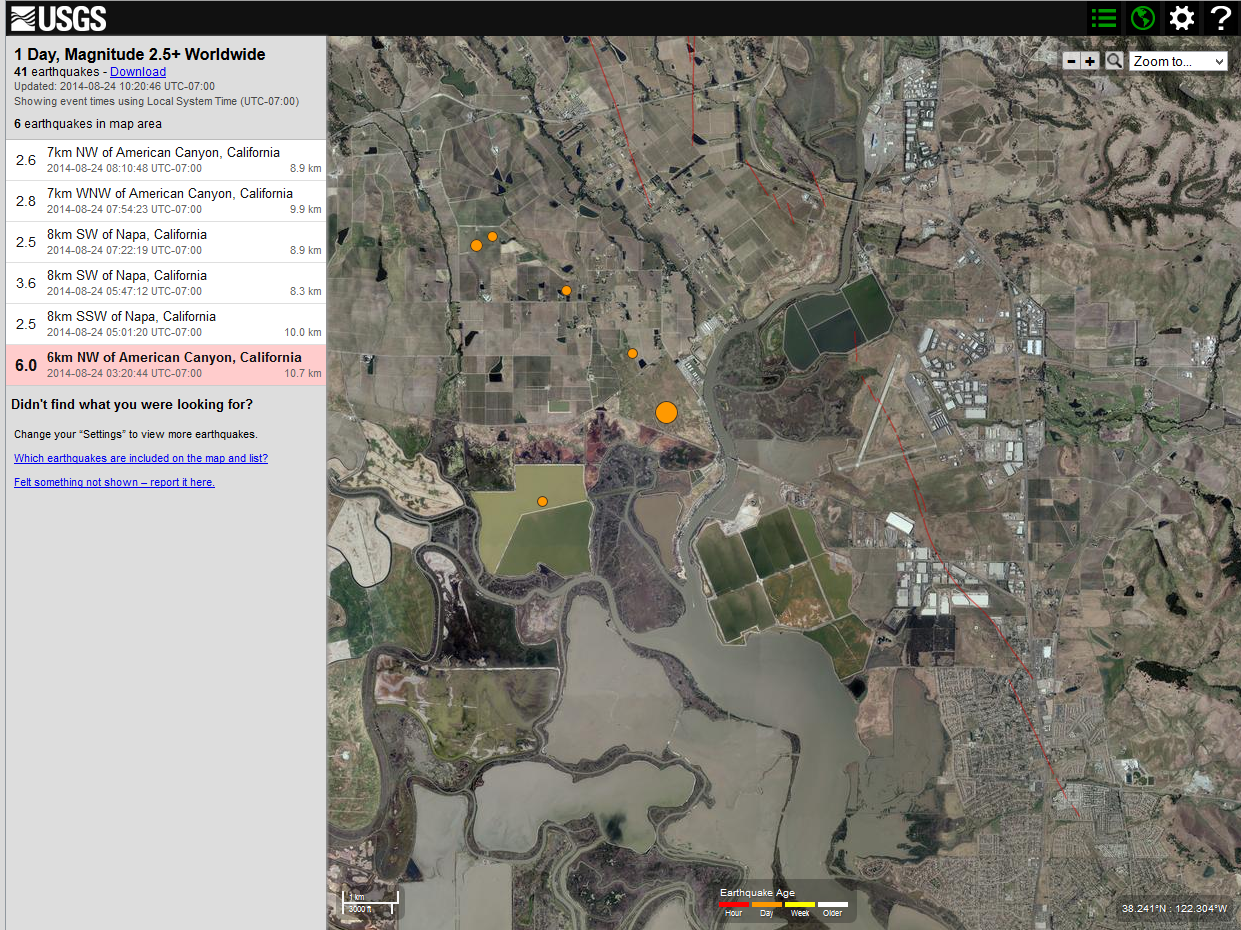 The California Integrated Seismic Network’s ShakeMap shows the intensity of the ground shaking, radiating out from the earthquake epicenter and aftershocks. Sensors are set to collect earthquake data across the state to facilitate emergency first responders.

Some interesting Earthquake Facts from the USGS include:

We’ve put together a list of educational references and resources to help you learn more about earthquakes.