The need to support the Rice Northwest Museum of Rocks and Minerals was the focus of the lead article in the January 2015 issue of Rock and Gem magazine this week. The article was written by Bob Jones, a personal friend of founders Richard and Helen Rice as well as Bill and Sharleen Rice Harvey, captured much of the history and lore of the collection. Bob highlighted some of the major minerals in the museum and the stories of how they came to be in the collection.

This museum actually far exceeds in quality many publicly supported mineral museums, due to the combination of a wide range of superbly crafted lapidary materials and an astounding collection of priceless minerals. The collections were originally assembled by Richard and Helen Rice, who began collecting in 1938.

These were what I call the œhalcyon years of rockhounding, when quantities of superb minerals were available at reasonable prices. Richard and Helen continued to collect right into the 1990s, an amazing length of time for any serious collector. The quality of their collections was so good they chose to establish a museum so the public could enjoy the fruits of their efforts. Thousands of visitors come to the museum each year. 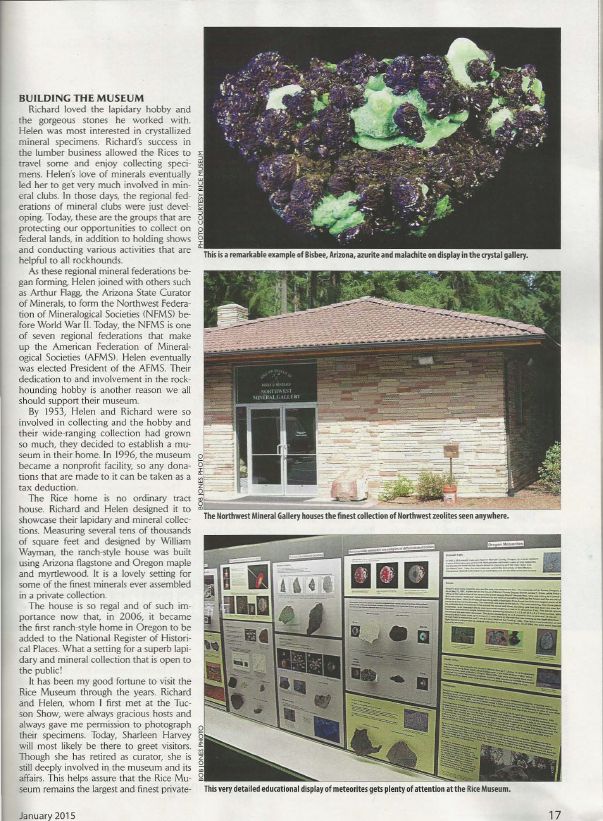 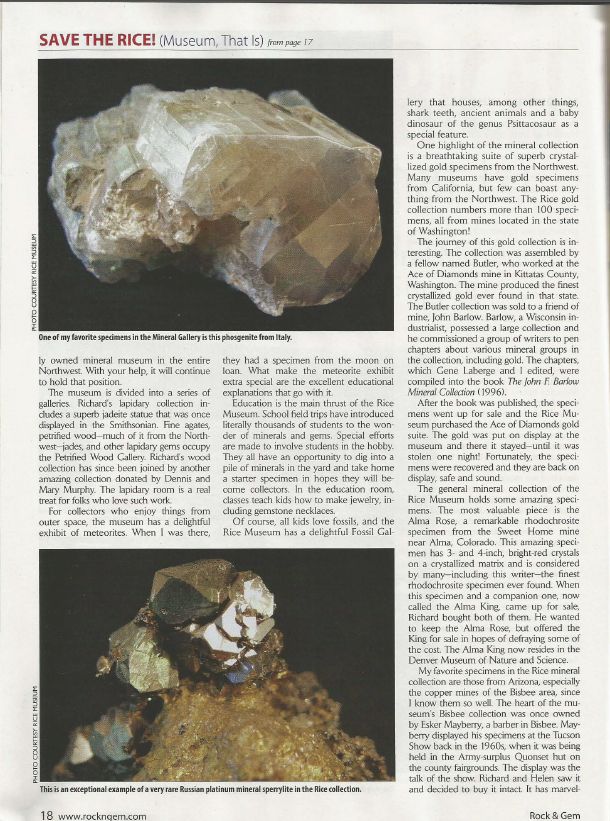 The article covers not only the birth and development of the Rice Northwest Museum, but the impact of its founders on mineral collectors and lapidary hobby by organizing local groups and national organizations to support encourage and educate future geologists and rockhounds.

Bob shares stories of watching the collection grow over the decades, and the stories of the daring rockhounds behind many of the exhibits in the museum. We are honored to have him share these stories with so many, and helping to preserve our heritage and history.

Not mentioned in the article are new hours, the strong independent board of directors, professional financial and organizational processes, an experienced management team, and improvements in our facility.

Here are four easy ways that you can support the Rice Museum today:

We appreciate the enthusiastic support of the Rice Museum by those who, like Bob Jones, played an important role in the development of the museum.